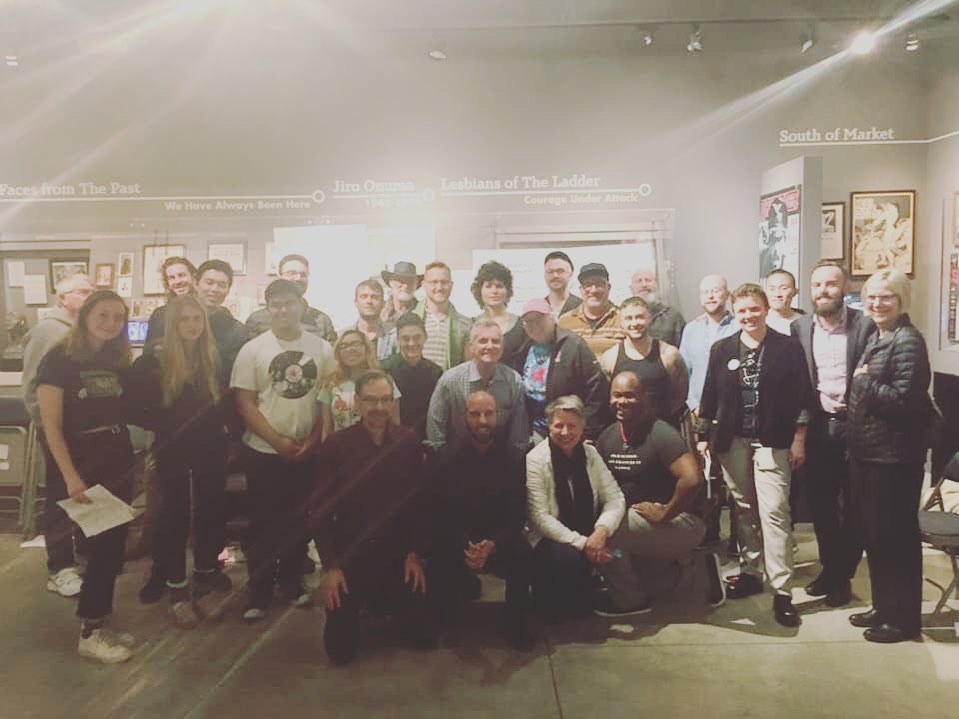 A trio of projects aimed at preserving and promoting San Francisco’s LGBT cultural heritage is set to move forward after encountering bureaucratic delays for months.

The Board of Supervisors in the coming weeks is expected to take up landmarking a historic LGBT bar and restaurant space in North Beach best known as the location of the Paper Doll. Drag queen Juanita MORE! is eying the property as a potential site to open her own eatery since shuttering her first place in the Tenderloin.

During Pride Month in June city leaders are expected to finalize a citywide LGBT cultural strategy that initially was expected to go before the supervisors earlier this year. A draft version of the document, which the Bay Area Reporter first reported on last fall, has been circulating through various city departments and agencies for feedback prior to being presented to the supervisors.

And at Tuesday’s board meeting gay District 8 Supervisor Rafael Mandelman introduced an ordinance to create a Castro LGBTQ Cultural District. Mandelman, who represents the city’s gayborhood, had been working with the city attorney’s office for the past month on finalizing the language for the ordinance, which must first be passed by the city’s historic preservation commission before going to the supervisors.

Mandelman hopes to see it be approved by the supervisors and mayor come July in order for it to be eligible for the next round of hotel tax money designated for cultural districts. Due to the passage of Proposition E last year, nearly 1.5 percent of the money from the 8% base hotel tax that the city already collects is dedicated to arts and cultural functions.

“A lot of good work has been done in other parts of the city to establish cultural districts. It makes sense to have a Castro LGBTQ Cultural District and be able to access the resources available in the city for cultural districts,” said Mandelman. “It is important to get this district done and get it on record and start thinking about how to more effectively protect and preserve LGBTQ arts and culture in the Castro.”

The Castro cultural district would be the third in the city focused on LGBTQ history, with ones in the Tenderloin and South of Market already established. The Castro LGBTQ district has been talked about for years, with efforts to establish it formally launched in February last year.

“For many people around the world the Castro neighborhood is known as the center of the queer universe. And it has played a critical role in the advancement of LGBT culture and political power. It has also been a place of sanctuary and fellowship for LGBTQ residents and businesses and visitors,” said GLBT Historical Society Executive Director Terry Beswick, who has been facilitating the community meetings to form the district. “But the neighborhood is experiencing many of the same challenges as the rest of the city and other gayborhoods around the country.”

Beswick pointed to gentrification, homelessness, income inequality, and a loss of cultural and racial diversity as just some of the issues confronting the Castro neighborhood and leading to the concerns about its longevity as a gayborhood. Otherwise, it could go the way of other neighborhoods in the city that were once gay havens, like the Polk and North Beach, but over time saw their LGBT residents move out and LGBT-owned businesses shutter.

Already in the Castro, said Beswick, “we are increasingly losing our LGBTQ people and businesses and queer diaspora. It is harder and harder for young people to live here.”

North Beach LGBT landmark
In October, the historic preservation commission signed off on making 524 Union Street a city landmark due to its being the home of several LGBT restaurants, most famously that of the Paper Doll, since the 1940s. In 2017, the Smucha family that owns the building sought to have its historical significance be officially recognized by the city.

It would be the city’s fourth property to be landmarked for its association with LGBT history. It would also be the first landmark in the country to focus on an early queer restaurant.

According to research done by the Smucha family and Shayne E. Watson, a lesbian and architectural historian hired to assist with the city landmark request, the site has housed bars and restaurants since the late 1840s and was rebuilt after the 1906 earthquake. Their report noted that Tom Arbulich in 1944 opened the Paper Doll Restaurant and Bar there and, three years later, it had become a favorite hangout for lesbians and other queer patrons.

By the mid-1950s gay men had claimed the space as their own, leading to a court fight over the suspension of its liquor license waged by then owner Dante Benedetti, a straight man. He lost his legal battle and later sold the bar; in the late 1960s and early 1970s the late B.A.R. founding publisher Bob Ross had two stints operating restaurants there.

By the 1980s the restaurant space lost its gay affiliations and was home to a number of establishments that catered to mostly straight clientele. It has been vacant since 2012 when the French bistro Le Bordeaux closed.

Due to the length of time the restaurant space has sat dormant, it lost the right to operate as an eatery. The Smucha family has been fighting with the city’s planning department to be able to rent it out to a restaurant operator.

Ironically, North Beach residents upset over how long the site has been vacant raised objections to the landmarking request, concerned it would provide a benefit that the Smucha family didn’t deserve, according to the office of District 3 Supervisor Aaron Peskin. The dispute delayed his sponsoring the landmark request at the board.

His aide, Lee Hepner, told the B.A.R. that the landmark request should go before the board’s land use committee later this month. He said there is no question based on the research done by the Smucha family that it deserves such recognition.

“The report on this site, we are of the opinion, is a pretty brilliant report. Obviously, it justifies the landmarking,” said Hepner. “It inspired us to look at this as a tool to landmark other significant LGBT historical sites in North Beach.”

Hepner added that, whatever business ends up moving into the space, “we think it would be awesome” if it nods to the history of it being an LGBT eatery and hangout.

MORE! told the B.A.R. that several people have suggested she seriously consider doing so.

“I am currently looking for a restaurant space. And Paper Doll is on my list. I’ve also been seriously considering some spots in the Castro,” she told the B.A.R. “Hell, I have four murals — why can’t I can have two restaurants? One in North Beach and one in the Castro!”

LGBT cultural strategy advances
Assisting LGBT entrepreneurs to open businesses throughout San Francisco is one of the many suggestions contained in the proposed LGBTQ+ Cultural Heritage Strategy the city is set to adopt this year.

Since 2017 a working group has devised the strategy in order to preserve the city’s LGBTQ cultural heritage. As the B.A.R. has previously reported, its formation came in response to community concerns about the shuttering of LGBT bars, businesses, and entertainment venues throughout the city.

It dovetailed with the separate initiatives to form the trio of LGBT cultural districts, landmark various LGBT historic sites throughout the city, and create public spaces that honor the local LGBT community’s history.

A draft version of the strategy was met with unanimous praise when first presented in September to the city’s Historic Preservation Commission. The oversight body must adopt the final version before it goes to the Board of Supervisors for adoption.

“The planning department has been meeting with additional departments who would be engaged with components of the report to support future implementation,” explained Clair Farley, who heads the Mayor’s Office of Transgender Initiatives and would oversee its implementation.

One of the strategy’s recommendations is to expand the scope of Farley’s office into more of an LGBTQ affairs office since she and her staff handle numerous issues impacting the city’s LGBT residents and not solely the transgender community. Other suggestions in the document include LGBTQ cultural competency training for public and private organizations, development of LGBTQ focused heritage and arts programming, and more affordable housing and workspace options for LGBTQ residents and artists in the city.

LGBT advocates told the B.A.R. they don’t expect to see major changes to the document from what was released in the fall. Farley said that both her office and Mayor London Breed “are still in support of the strategy.”

Planning department spokeswoman Gina Simi told the B.A.R. that the working group is now reviewing revisions to the draft plan and that the agency expects “the strategy to go before the board for approval in June.”